Attending an event is an opportunity to get exposed to topics and people that you didn’t necessarily plan for. In March 2021, I attended the first edition of lbc2.fr, an afternoon of tech talks happening online and organized by leboncoin.

The event speakers work at tech companies in France (leboncoin, Doctolib and Deezer, …), Europe (Zalando) and the US (Netflix, Microsoft). What follows is a mix of reflections around knowledge-sharing initiatives within and between tech companies inspired by three talks.

The data tribe at leboncoin rapidly grew to 50 members and supports the work of 40 feature teams. The increasing number of requests from feature teams became a bottleneck.

As with any other organizational or technical problem, it’s likely that bigger companies have experienced the same challenges before. That’s why leboncoin reached out to Zalando, Europe’s leading online platform for fashion, to learn more about how they applied the Data Mesh organization. The term Data Mesh was coined in 2019 by Zhamak Dehghani in her article How to Move Beyond a Monolithic Data Lake to a Distributed Data Mesh.

In the talk, Max Schultze describes Zalando’s data organization and how it experienced the same issues as leboncoin. When a data consumer finds a data quality issue, it’s passed on to the data platform team that lacks knowledge of the data and then has to find someone on the data source team to help. Having a centralized data platform team became the bottleneck. 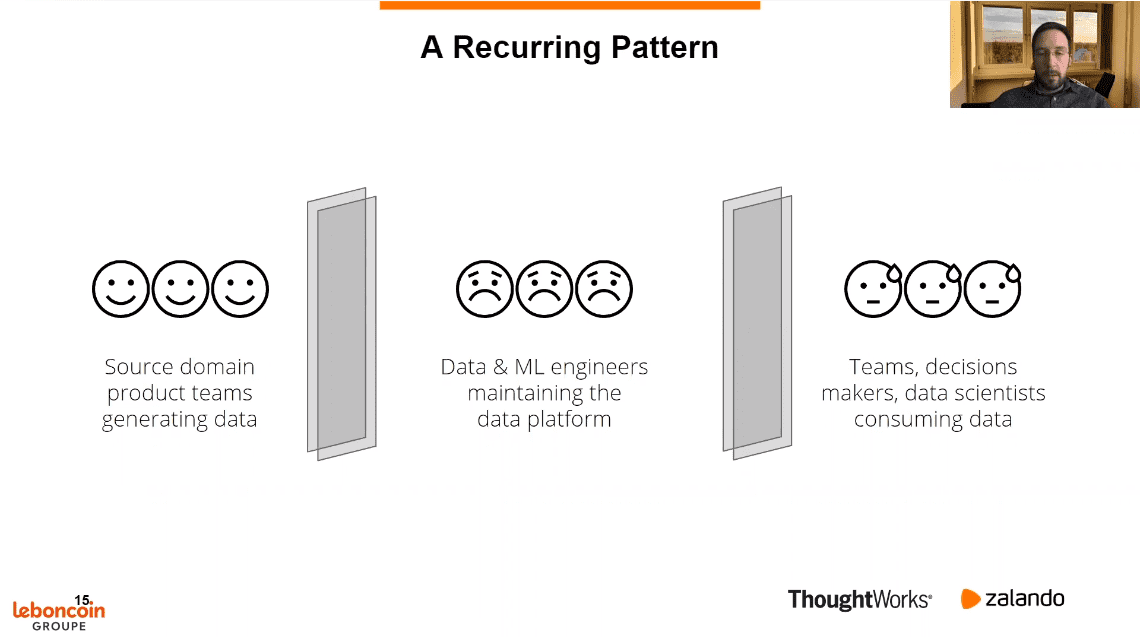 A Data Mesh is applying mature concepts in software development, like product thinking, to data teams. In the same way that many development teams are now organized into cross-functional feature teams, Zalando created teams responsible for a data product.

Still, technology can help by building a self-service data platform to make it easier for each team to own the product, instead of relying on a centralized data team.

Teams are autonomous but build their products using the same data platform instead of diverging from each other. At Zalando, 40 teams use the BYOB (bring your own bucket) approach and 100 teams use the same data processing platform built on top of Databricks. This sounds easier than done, as each team may be tempted to build their own data platform. “Off the shelf” data tooling is made possible thanks to “template-driven data preparation” and thorough documentation, another example of knowledge sharing within the company. Technology and datasets are shared between teams at Zalando. For example, the data product team that builds a domain dataset is also responsible for making it discoverable and usable by other teams.

Data teams at French companies are expanding, and will soon reach a new dimension. Still, I feel like most new tech trends are coined at bigger companies overseas, and then adapted by French companies. You can check this selection of articles from 70+ tech blogs by French companies about adopting Agile methodologies, Spotify’s model, Liberating Structures and Servant Leadership among other organizational trends.

By Benjamin Guincestre (Director of Core Engineering at Deezer)

In 2017, Deezer wanted to offer an alternative to living in Paris for employees to grow at Deezer. Between Nantes and Bordeaux, they chose to open their second office in Bordeaux. Benjamin Guincestre works at Deezer headquarters in Paris, but most of his team relocated to Bordeaux. 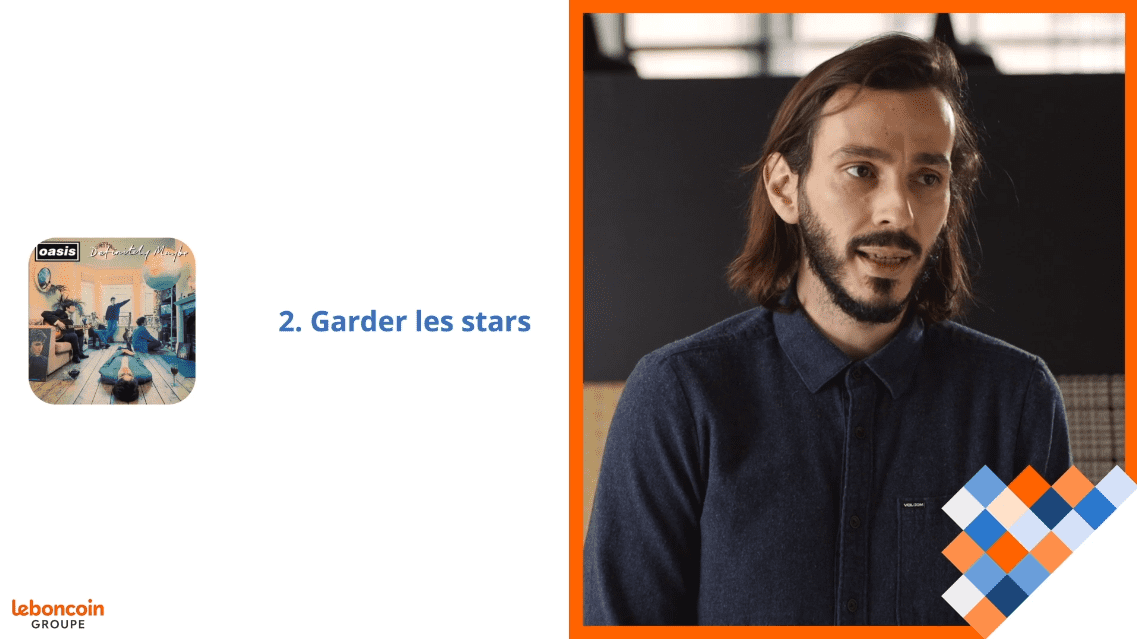 The first challenge for Benjamin’s team was to keep the proximity with Paris by maintaining rituals with an excellent internet connection between the two offices and making it possible to meet in person from time to time. The second challenge to open new offices was to fill them and integrate with the local startup ecosystem and universities. The third challenge was to recruit in Bordeaux (40% of new employees in Bordeaux). Overall, the Bordeaux office helped to create a more diverse company, reduce turnover and thus increase the team seniority.

But why not go for full remote? For Benjamin, having a physical office also helps with talent retention and recruitment by interacting with the Bordeaux tech scene by hosting meetups.

Deezer had the chance to open a second office in Bordeaux before covid and adapt to remote work progressively. Even if in the last year, all French tech companies and employees adapted to remote work, I believe that many of them will still open new offices out of Paris and the current crisis may accelerate this transition.

Peer to peer learning initiatives allow employees to learn from colleagues, communities and other companies. In the last decade, the workforce has gone from a single long training period during their studies to more frequent and shorter learning experiences. Tech conferences, weekly meetings with colleagues and daily chats are part of what we know as peer to peer learning. For Charline, it’s essential that the top management supports learning initiatives coming from employees. 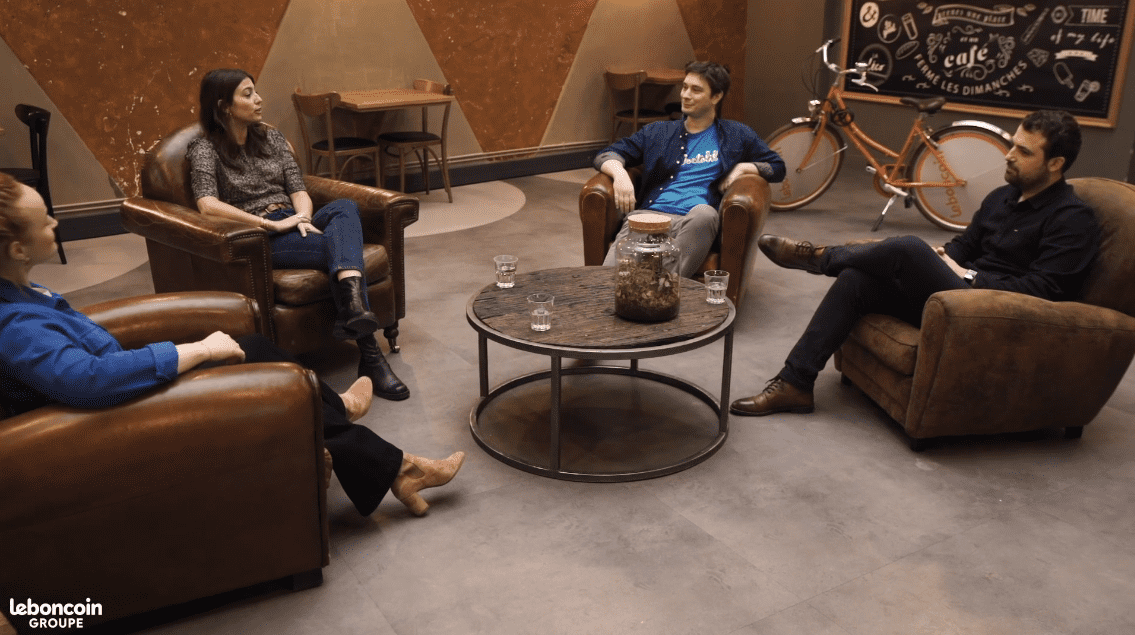 At leboncoin, employees are supported to take at least one course and attend one event per year. Each developer belongs to two teams: the feature team and a tech guild. Every two weeks, each guild meets to share their learnings. For Guillaume, it’s never been easier to reach out to potential mentors online and find communities you want to belong to, such as Meetup groups and open-source projects.

There are inconveniences to remote communication being generalized but also advantages like being able to reach out to companies that are further away. For example, Guillaume reached out to Zalando and Netflix to learn from their experiences.

At Doctolib, it’s assumed that newcomers need training so they have created an Academy to onboard employees during their first weeks. They also organize masterclasses for key technologies and they have a program to do peer mentoring for one hour per week. Another initiative coming from an employee was to start a weekly newsletter, Tech life at Doctolib, to share a curation of tech articles around their tech stack. The newsletter is now open to everyone.

The roundtable was animated by Chloé Hermary, founder of Ada Tech School, a feminist coding school accessible to all. I believe that the French tech can benefit tremendously from more diversity, including more female engineers, international talent, graduates from coding schools and a tech scene beyond Paris. As a Data Engineer who started his professional career in Paris five years ago, and now works remotely from La Rochelle, I am happy to see more initiatives like the French Tech International Slack Community, created by STATION F.

Other independent initiatives include Guriosity, a collection of articles from 70+ tech blogs by French companies run by myself. Employees from French tech companies are also creating their own knowledge-sharing initiatives. Some of them are spreading fast, like the Modern Data Network Slack group, which already gathers data leaders from one hundred French companies.

What’s next for the French tech?

You can now access the replays from the first edition of lbc2.fr. I am looking forward to next year’s selection of topics and speakers. This year I only missed the casual networking of a physical event. Maybe that’s something that can be built on for next year even if the conference still take place online.

Multiple French tech companies have reached a size where they’ll be forced to innovate and create new models that will hopefully inspire companies overseas through conferences and blog articles. With Guriosity, I want to encourage more French tech teams to write about their learnings and make sure they are read by you.